Meet the storm chaser who gets a thrill from severe weather 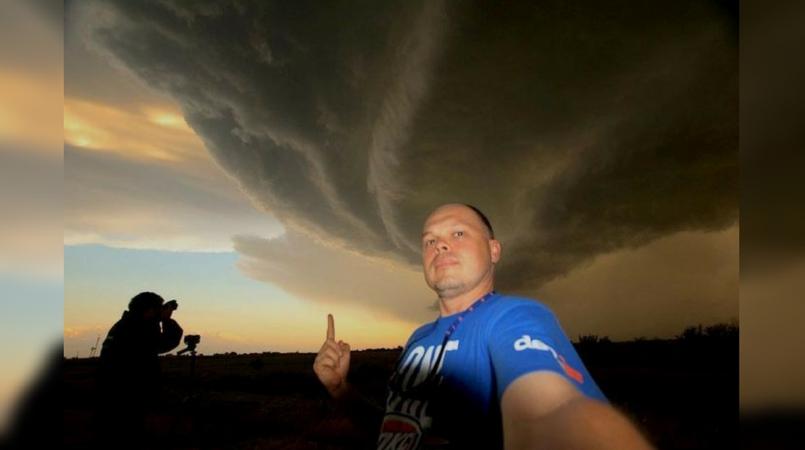 Paul Lyons has learnt how to control the adrenaline surges, but being in the middle of a massive storm still awakens a primal fascination he first identified as a small child.

"I was the kid that Mum used to yell out to get off the patio and stop sitting outside watching the lightning and the thunderstorms," he told ABC News Breakfast.

The freelance cameraman and passionate storm chaser has spent the last seven years chasing storms in Australia and travelling to the US to volunteer as a driver for tourist groups wanting to experience the same thrills.

Tornados are the big attraction in America and he's seen 63 in just the last few years. He also raced to meet Cyclone Yasi, which tore through Queensland in 2011.

"There's a whole heap of people who chase for different reasons," he said.

"The goal in chasing a cyclone, from a storm chaser's point of view, is to try and have an experience within the eye.

"I'd love to just see the amazingness of mother nature out in vast fields where nobody gets hurt, but unfortunately that doesn't always happen."

Today Mr Lyons is in northern Queensland tracking Cyclone Debbie and filming the preparations and responses for the ABC.

The Townsville local said this time he didn't need to chase the storm — it came to him.

And unlike tornados, which are relatively localised, cyclones can be much harder to track and predict.

"Even a high-end category two all the way up to a five, you just can't sit in your car on the side of the road and experience it," he said.

"You'll have debris flying and you'll have your windows smashed out and then you've got issues with your life."

Storm chasers come in all shapes and sizes, according to Mr Lyons, but for most the ultimate prize is what is called the "stadium effect".

"If you actually have a really severe cyclone, when the eye comes over you can look up and see blue sky or stars," he said.

"There's an account I heard when Cyclone Larry went over Innisfail back in the mid 2000s.

"People looked up and saw stars as the eye came over the top."

Technology has made the task of storm chasing much easier since the days when Mr Lyons would get out the charts and try to plot cyclone movements with the scant satellite images published in the newspapers.

Now there are myriad online tools and radars available to plot exactly where and when a storm is expected to hit.

"I know some chasers have some meteorological training and some are just self-taught," he said.

"It's using those skills you have to try to judge."

But it doesn't always go to plan.

Death is a very real prospect

Mr Lyons describes himself a safety-first kind of storm chaser. Still, that only gets you so far.

"We always work with a window of safety," he said.

"Usually tornados go south-west, north-east in the northern hemisphere, so they're fairly predictable with their paths.

In 2013 three close friends of the tour company he works with in the US were tracking a tornado near Oklahoma City and using scientific pods to gather data on the storm.

But something went wrong and when the tornado hit them they were gone.

"That was a wake-up call," Mr Lyons said.

When he went into Cyclone Yasi in 2011 he was chastised by people who said he was taking foolish risks.

"They said 'You're stupid, you're nuts, you're dangerous. You're going to endanger yourself, endanger the lives of others and the emergency services'."

"But I went in with 200 litres of fuel, 100 litres of water, two weeks of food, I had accommodation with me.

"I could have camped on the side of the road basically for two weeks and no-one would have to save me."

Far from simple thrill seeking, storm chasers can also help educate the public about what happens during a cyclone, Mr Lyons said.

"People maybe see the preparation before the storm and they see the aftermath but they don't connect," he said.

"I think what storm chasing can do with the gathering of video is sometimes cover the gap."