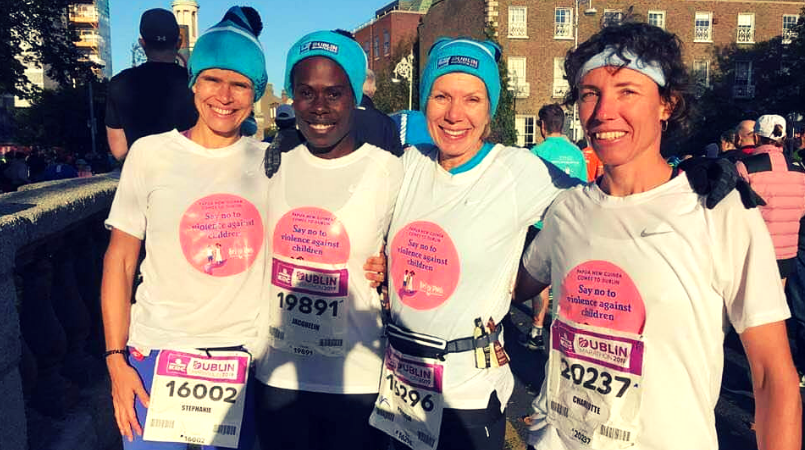 Wearing t-shirts saying, “Leave No one Behind”, on top of running shoes and track pants, four local development workers took part in the famous Dublin Marathon – and all 42km went according to plan.

“None of us are exactly professional athletes, but we did our best to be great ambassadors for PNG, and the wonderful people who call this country home. And I can certainly report that there’s a lot of interest out there,” said Copus-Campbell.

“People were utterly fascinated by the fact that we have over 800 different languages, not to mention literally thousands of unique plants and animals. It’s a beautiful place, quite unlike any other, and I believe that we got that message across.”

Amongst 22,500 runners, and a crowd of at least twice amassed on the footpaths, the women were not just running to raise awareness of PNG, but in pursuit of funds.

Thanks to sponsors like Oil Search and Curtain Brothers, and plenty of individual donations, services for PNG child survivors of violence now have an extra K250,000 to spend.

“I’ve chosen to run this marathon as part of a greater journey to address the level of violence that affects women and children in PNG,” said Joseph, who had never run anything close to 42km, but finished the race with a radiant smile.

First staged in 1980, Dublin is Europe’s fifth-largest marathon – and a magnet for runners of every stripe. While plenty of elite athletes compete, they are joined by thousands of ordinary people who just want to get to the finish line, even if it takes five or six hours.

For Joseph, it is an attitude that successful development workers need to adopt as well.

“So much of what we do is about persistence,” she says. “It’s about gritting your teeth and allowing your heart to carry you when your legs won’t anymore.

“Working in the family violence space isn’t glamorous, and genuine change can take decades or more. It’s hard to get an instant ‘win’ – and, if you do, there won’t be medals and applause.

“But I can’t think of anything I’d rather be doing. Or a country that I could be prouder to represent.”

Tags:
“Leave No one Behind”
Dublin Marathon 2019
Author:
Press release