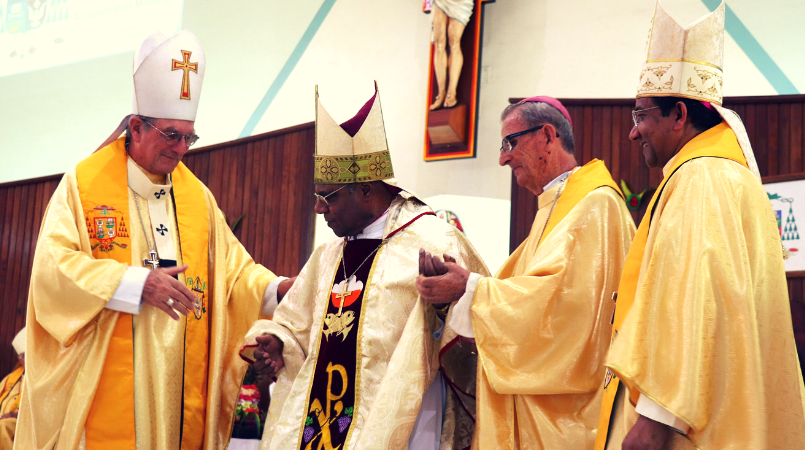 Over 2,500 people were present at the Holy Spirit Cathedral on October 31st to join in the Eucharistic celebration.

The newly installed Archbishop began his homily in the Eucharistic mass by reminding the parishioners that everyone needs Christ for support and that they should live a Christ-like lifestyle. He further added that as their new archbishop, he needs the help and the communion of the parishioners.

Archbishop Vayalunkal highlighted the relationship between Christ and his disciples (Jn 15:1-17) and stressed the need to be close to Jesus.

“As you faithfully attend the pastoral needs of the local Church, may you be guided by the Virgin Mother, to show to all, the merciful face and goodness of her Son, Jesus Christ,” he said.  He reminded the archbishop of the invitation of Pope Francis to become the ‘Sacrament of Closeness’ – Close to God in prayer, close to the people of God entrusted to him and close to his priests.

Anton Bal formerly served the Diocese of Kundiawa before the Vatican Embassy announced his appointment to the Archdiocese of Madang in July this year.

Archbishop Anton Bal received his episcopal consecration on 12th January 2009 and was appointed as the Bishop of Kundiawa.  He is the vice president of the Catholic Bishops Conference of PNG and the Solomon Islands. He is also the Chairman of the committee for Integral Human Development and Deputy Bishop for National Family Life Commission.

(Archbishop Anton Bal being led to the chair)