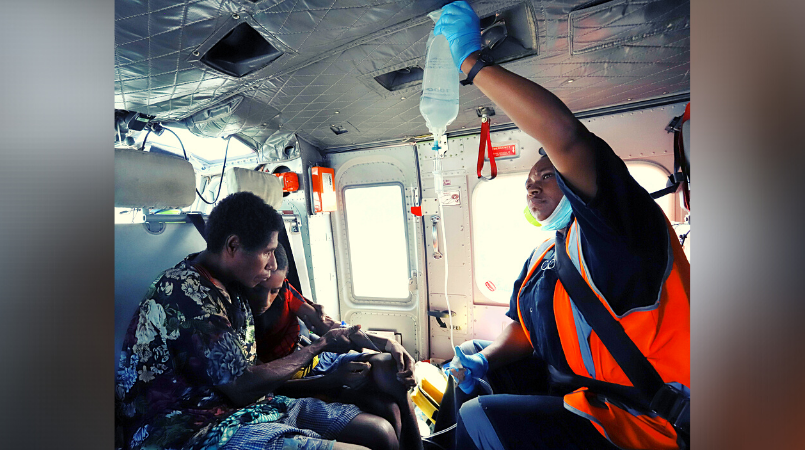 A nurse at the Tabubil Hospital recently reached the pinnacle of her career when she saved a 10-year-old boy from a remote village in Western Province during a recent medevac operation.

Angela Gul, an intensive care nurse was part of the medevac on June 24 that went to Seltamin village, about 30 minutes by chopper from Tabubil, to rescue young Moses Stanley who had been suffering from diarrhoea and fever for a month.

When the medevac team arrived at the village, the boy was very pale and dehydrated and was lying in his mother’s arm. Young Moses was also a septicaemia patient which added to his deteriorating condition.

Gul was able to stabilise the boy with saline fluids while in the chopper returning to Tabubil.

“This was my first ever medevac operation and I felt that I had reached the pinnacle of my career as an intensive care nurse when I attended to that child,” she said.

Also on the trip was a tuberculosis patient seeking treatment at the hospital.

Gul said in her 15 years of being a nurse, she had never felt more deserving of her role until that medevac operation.

“This is my definition of reaching out and providing basic health care to our people who need it the most. And I want to thank my employer Tabubil Hospital and Ok Tedi Mining Limited (OTML) for giving me that opportunity to be part of this medevac,” she said.

With the support of the Tabubil Hospital, OTML has been providing medevacs, including other assistances, to the local communities for many years.

Gul hails from East Sepik and Simbu provinces and was a general practicing nurse for 8 years before completing her Bachelor’s Degree in Intensive Care Nursing at the University of Papua New Guinea in 2015. She had been an intensive care nurse for five years when she joined Tabubil Hospital in May 2019.

Staff at the Tabubil Hospital are an important part of the many medevac operations carried out by OTML as part of its community service.

Sosica Stanley, mother of the young patient, thanked the OTML and hospital for saving her child, who is currently recovering.