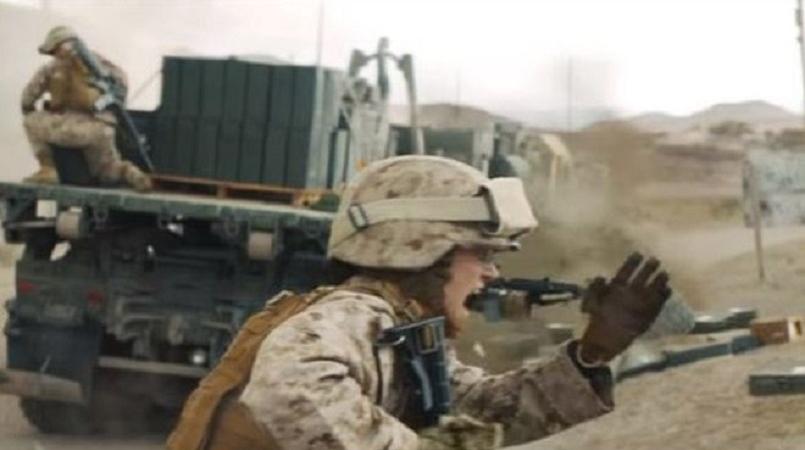 The US Marine Corps has defended its latest recruitment advert - the first led by a woman - after critics said it panders to political correctness.

The commercial, titled "Battle Up" follows the evolution of a female Marine.

She is seen as a schoolgirl standing up to bullies, on a rugby pitch, under fire in combat, and as a veteran helping the homeless.

The service said it celebrates the Marines' "fighting spirit".

In the advert, the protagonist tackles an obstacle course through icy water as the narrator intones: "No one knows where it comes from. Why some have it, and some don't. It's the fighting spirit, and it needs to be fed.

"It consumes fear, self-doubt and weakness. It stands ready to protect those in danger and to fight - whatever shape the battle takes."

The Corps hopes the advert will attract women, especially athletes, and send the message that the Marines isn't only open to "a few good men".

Capt. Erin Demchko, who plays the logistics officer in the ad, served in Afghanistan. She is currently a deputy commander at Camp Courtney in Okinawa, Japan.

The advert has been viewed almost 690,000 times on Facebook since it was posted by the official US Marine Corps account on 12 May.

But while some praised its unifying message and thanked Capt. Demchko for her service, others sneered.

Facebook commenter Chris Clark remarked: "Had to be a chick...tired of all this political correct bull****... now let all the man haters come out of the woodwork..."

The Marine Corps account replied directly to his comment, writing: "That's not a "chick", Chris. You're watching a Marine."

The force also went into battle on its YouTube account, telling the advert's critics: "Fans, this is not 'Social Justice Warrior' stuff - just warrior stuff.

"Her story, service and dedication to our country is no less than any of yours because she happens to be a woman.

"We are recruiting those who share our fighting spirit, and who also meet our higher-than-ever standards and requirements. If that doesn't describe you, then you can probably find better ways to spend your time instead of posting comments on a recruiting-specific social media page."

The Marine Corp is pushing harder than ever to appeal to female recruits, after a nude photo scandal in which a number of Marines shared naked photographs of female colleagues on Facebook.

The pictures were posted within a members-only group, and accompanied by highly aggressive threats.

The photo sharing began in the same month that the first US Marine infantry unit began receiving women.