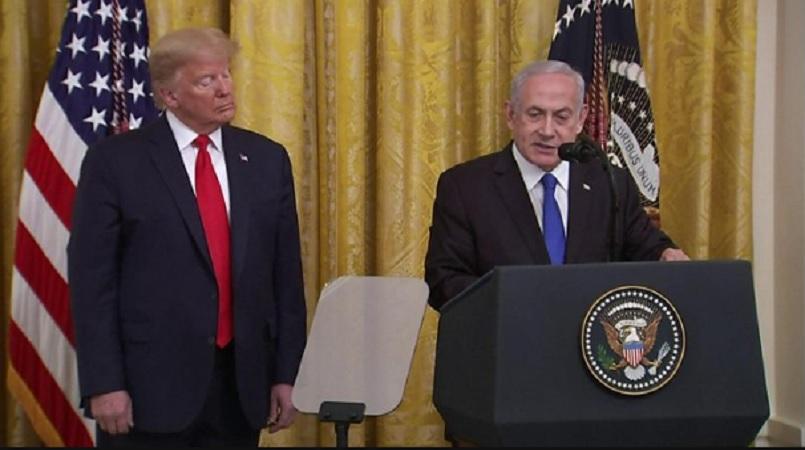 He proposed an independent Palestinian state and the recognition of Israeli sovereignty over West Bank settlements.

Standing alongside Israeli PM Benjamin Netanyahu at the White House, Mr Trump said his proposals "could be the last opportunity" for Palestinians.

Palestinian President Mahmoud Abbas dismissed the plans as a "conspiracy".

"I say to Trump and Netanyahu: Jerusalem is not for sale, all our rights are not for sale and are not for bargain. And your deal, the conspiracy, will not pass," he said in a televised address from Ramallah in the West Bank.

The blueprint, which aims to solve one of the world's longest-running conflicts, was drafted under the stewardship of President Trump's son-in-law Jared Kushner.

Thousands of Palestinians protested in the Gaza Strip earlier on Tuesday, while the Israeli military deployed reinforcements in the occupied West Bank.

The joint announcement came as both Mr Trump and Mr Netanyahu faced political challenges at home. Mr Trump is the subject of an impeachment trial in the US Senate while the Israeli PM on Tuesday dropped his bid for immunity on corruption charges. Both men deny any wrongdoing.

David Friedman, the US ambassador to Israel, said that the timing of the announcement was not tied to any political development, adding it had been "fully baked" for some time.

What are Trump's key proposals?

"My vision presents a win-win opportunity for both sides, a realistic two-state solution that resolves the risk of Palestinian statehood to Israel's security."

"Palestinians are in poverty and violence, exploited by those seeking to use them as pawns to advance terrorism and extremism. They deserve a far better life," Mr Trump said.