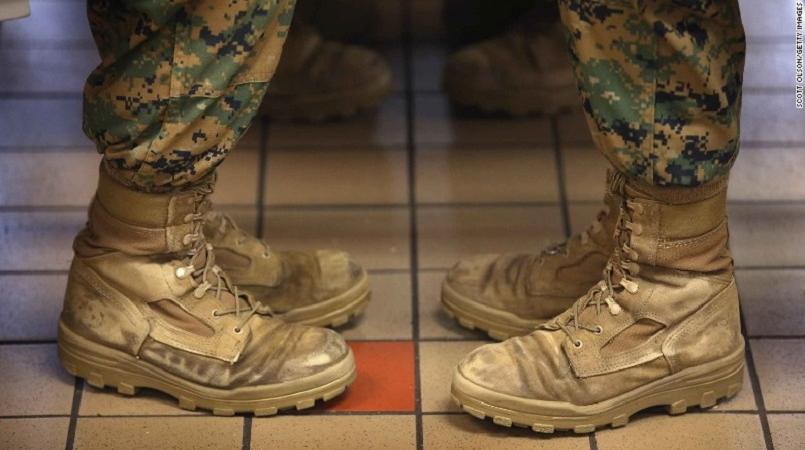 If you think the 30,000-strong private Facebook group that was sharing nude images of female Marines has been shut down, guess again.

Members have been redirected to new pages. In one case, someone not only launched a new page -- Marines United 2, or MU2 -- that promises to better weed out anyone looking to blow the whistle on the group's depraved behavior, but members have taken to taunting federal and military investigators.

"It would be hilarious if one of these FBI or (Naval Criminal Investigative Service) f***s found their wife on here," one member said on the original Marines United page.

This and other revelatory screenshots from the group were made available to CNN by former Marine Sgt. James LaPorta. A freelance journalist, LaPorta was invited into the original Facebook group by another Marine, he said.

LaPorta was able to navigate the original group, where men continued to post lewd comments about the scores of victimized women and cheer each time another news outlet reported on the group. He was eventually booted for being a journalist.

But not before he shared with CNN dozens of screenshots demonstrating the members' behavior, which included a link to a cloud storage site containing more than 2,500 images of women in stages of undress or engaging in sexual acts.

The Naval Criminal Investigative Service has said it's investigating and set up a number to accept text tips on who has been posting the photos.

LaPorta said he spoke to two female Marines who called the images and comments "unreal" and "disgusting." They felt betrayed, he said.

"How am I supposed to lead my Marines when something as uncontrollable as my gender is what limits me?" LaPorta recalled one of the women, an officer, saying.

Former Marines Cpl. Elle Audra, a tattoo model with many professional photos on social media, told the Marine Corps Times she suspected her images made it to Marines United after she began getting harassing messages, including one from a man who knew when and where she'd been deployed. He asked her if she'd have sex with him, she said.

In a Facebook post, she decried "slut shaming and rape culture mentality" and said the group's apparent goal was to degrade and humiliate female troops.

"That's not the foundation of the Marine Corps and the fact that it has always been common practice and women are scared to speak out about sexual harassment, sexual assault or domestic violence is the issue," she wrote.

Kelsie Stone is not a Marine, but she's the daughter of one. She tends bar in a town with many Marines, she told the Marine Corps Times, and she now finds herself hesitant to leave the house because an ex-boyfriend posted images of her on the site. She sent them to him while they were still dating, she said.

"Some of the comments have them mentioning how they liked what they saw, how could they get some of that or whatever," Stone told the publication. "I've been called a whore for even sending pictures like that in the first place."

One of the Marines United members who LaPorta says posted the link to the explicit photos, seemed to revel in the media attention and mocked apparently premature reports that the group had been shut down.

"My dad just asked if I was a part of the group Marines United. He just saw all the hubbub on the interwebs about the 'scandal' going on. Statements made by the media, 'The group was shut down with hours,' and 'The pictures have been removed,'" he wrote, adding, "bwahahahahahaha. Not nearly boys!"

The new group page will include "settings" to ensure no "BFs" are granted access, wrote a man sharing the redirect on Facebook. BFs are blue falcons, a term used for someone who would betray a fellow service member.

"It allowed us to take immediate action to have the explicit photos taken down and to prepare to support potential victims. We are exploring what actions should be taken to best address this form of harassment in the future," Alvis said in a statement.

And then the threats came

Brennan was quickly kicked out of the group and correctly suspected he would be met with threats, LaPorta said. LaPorta was able to navigate the site for about two more days before he was shut out, too.

Brennan faced claims he had forsaken his fellow Marines and should be waterboarded, or raped and infected with AIDS, people posted on Facebook. Someone offered a bounty for images of Brennan's "girl," and another remarked that the world would be a better place if Brennan "turned up dead in a back alley somewhere."

Before the public scrutiny sent Marines United scurrying to new Facebook groups, the members had a few rules, LaPorta told CNN, providing screenshots to back his reporting.

No women, for one. No talking about Marines United. "NO REPORTING TO FACEBOOK!" blared another. All members had to be Marines, Fleet Marine Force Corpsman or British Royal Marines. And no direct threats of harm.

There was no rule, however, against posting naked images of "Wooks" or "Wookies" -- a mean-spirited comparison of female Marines to Star Wars' Chewbacca -- to a shared drive, LaPorta said.

The drive, disseminated in January, contained more than two dozen women's names, ranks and units, according to Brennan's reporting.

A former Marine told CNN's Alison Kosik the Facebook pages were supposed to be places where service members from several branches could reconnect and chat.

But Marines United became a group where people posted pictures of naked women. The Marine veteran said it wasn't done maliciously and many women submitted their own photos. Other photos were posted online on other websites, including social media, for instance, before being reported, he said.

"Did that happen? Yes, and that's not OK. But most of the pics weren't from that," he said.

The Marine veteran, who didn't want to be identified, said there are multiple sites being run by 20 to 30 people. One group administrator deactivates his group every few days and starts a new one, the Marine vet said.

The new Marines United group has 29,937 members, he said. The group description says: "Have some laughs, spread some hate; but don't be a b***h and report s**t."

How many Marines involved?

The women whose images were posted brought this on themselves, several commenters wrote, saying that if they didn't want their nude photos circulated, they shouldn't have taken them, LaPorta said.

"I did see some of the same men posting over and over again and engaging in the conduct," said LaPorta.

Men would make sexually charged comments about the photos, or suggest the women should be raped, he said.

In one case, members urged the provider of photos of a woman at Camp Lejeune, North Carolina, to videotape an assault on her, "for science," Brennan reported.

Military officials said Sunday the folder had been removed at the military's request, but CNN was still able to open at least one of the links Wednesday.

It was not clear to the Defense Department how many current and former Marines may be involved. The number is probably in the dozens, a US military official said, but he added that that number might be high.

Before he got booted from the group, LaPorta said, he saw the members' brazen response to being outed.

Some posted more naked images, with captions mocking the NCIS probe. Another encouraged fellow members to "stay strong" and posted an image of a T-shirt that said, "Admit nothing, deny everything, make counteraccusations."

Veterans boasted that they were outside NCIS jurisdiction. One posted a picture of his discharge paperwork with the caption, "Come at me, NCIS."

The members neither were deterred from engaging in a tradition called "Racist Sunday," in which the Marines break into groups by race and send each other racist memes.

Asked if he ever saw any member voice concern or suggest the Marines shouldn't be treating their fellow troops in such a way, LaPorta said no.

Any Marines involved could be charged under provisions forbidding conduct unbecoming of a military officer, behavior that brings discredit to the armed force, or broadcasting images without a person's consent when there is a reasonable expectation of privacy, the statement said.