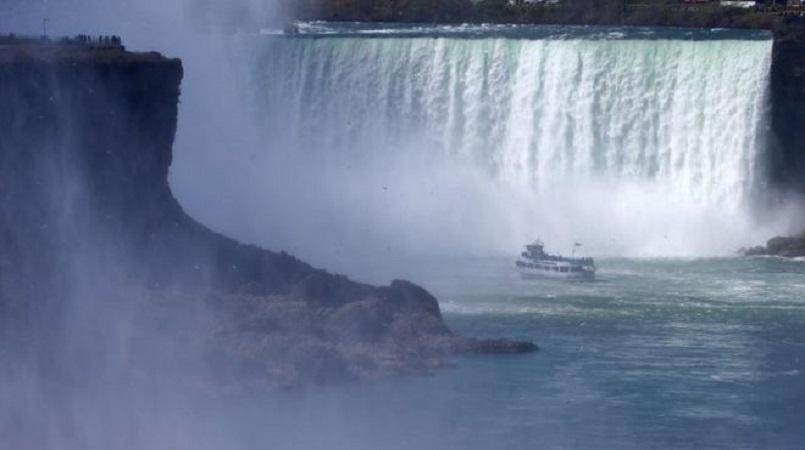 Niagara Falls Park Police say a man was "swept over" a waterfall, but survived the drop of roughly 188ft (57 metres) into the raging river below.

The man "was observed to climb over retaining wall" around 04:00 (09:00 GMT) on Tuesday before falling over the cliff, police said on Twitter.

After searching beneath the falls, police found the man "sitting on rocks" with non-life threatening injuries.

The man, who police have not identified, was taken to hospital.

The man was near the brink of Horseshoe Falls - the largest of the three falls that make up Niagara Falls, officials say.

He was found on the side of the river near the Journey Behind the Falls observation platform, according to Buffalo News.

Mayor Jim Diodati of Niagara Falls, Ontario, told the newspaper that he believes "all-time high [water] levels" may have contributed to saving the man's life.

"When Lake Erie is higher and flowing more robustly to Lake Ontario, there is a better chance of missing the massive boulders under the Horseshoe Falls," Mr Diodati said.

"The only way you would ever have a chance to survive that kind of a fall was to overshoot the large rocks below," he continued, adding: "In this case, for this individual, hopefully he will see it as a blessing."

The park - which contains North America's largest waterfall and sits on the US-Canada border - draws tens of millions of visitors each year.

According to the Niagara Parks website, more than six million cubic feet of water rush over the crest of the falls every minute.

The features, the park says, "may be the fastest moving waterfalls in the world".

Many have died going over the falls, but a handful have managed to survive in the past.

According to Buffalo News, an estimated 25 people kill themselves by going over the falls each year.