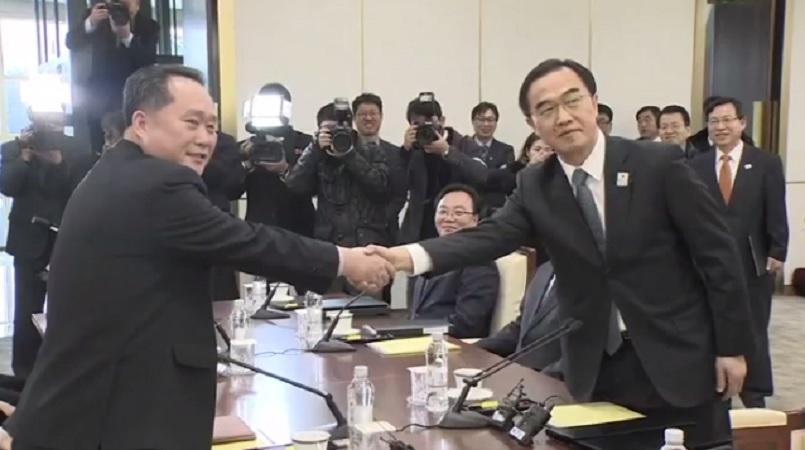 North and South Korea have agreed to hold military talks to defuse border tension, after their first high-level meeting in two years.

The North will also send a delegation to the 2018 Winter Olympic Games taking place in South Korea in February.

However, the North's delegation was negative on the subject of denuclearisation, the South added.

The United States gave a cautious welcome to the meeting.

The state department said the US remained in close consultations with South Korean officials who would ensure the North's participation in the Winter Olympics did not violate UN sanctions.

After a day of negotiations, the two sides issued a joint statement which confirmed they had agreed to hold military talks on defusing military tension.

The North also agreed to send a National Olympic Committee delegation, athletes, cheerleaders, art performers, spectators, a taekwondo demonstration team and media to the games, while the South would provide the necessary amenities and facilities.

The statement also referred to exchanges in other, unspecified areas and other high-level talks to improve relations, the South's Yonhap news agency reports.

The South asked the North to end any hostile acts that might raise tension, while the North agreed there was a need to guarantee a peaceful environment on the peninsula, a statement from the South's government said.

Other details had been released throughout the day by officials from the South:

§  The South pushed for the reunion of family members separated by the Korean War - a highly emotional issue for both countries - to take place during the Lunar New Year holiday, which falls in the middle of the Games

§  The South said it would consider temporarily lifting relevant sanctions, in co-ordination with the UN, to facilitate the North's participation in the Olympics

The North's reaction to these proposals is not known.