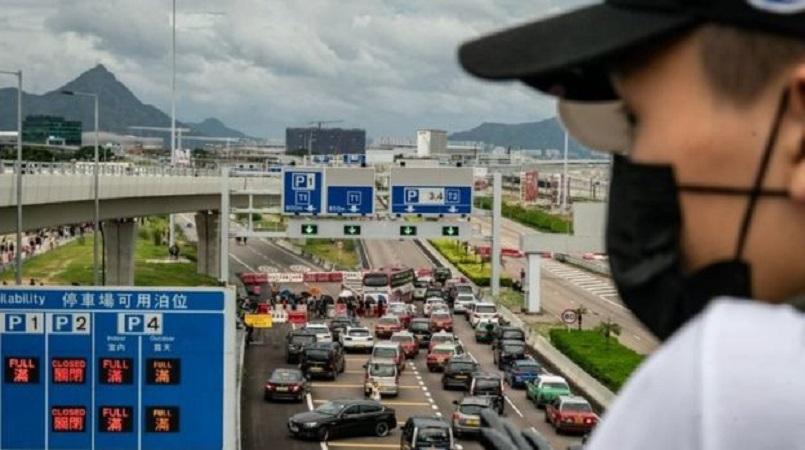 Pro-democracy protesters in Hong Kong have blocked roads to the territory's airport, disrupting the operation of the major Asian transport hub.

Trains to the airport were halted and roads blocked. Passengers had to walk to the terminal. Most flights operated as normal, but delays were reported.

Thousands of black-clad protesters then tried to enter the terminal building but were stopped by riot police.

On Saturday, police and protesters clashed during a banned rally.

Live warning shots were fired into the air and tear gas and water cannon used to disperse tens of thousands of protesters.

Police say they were called to the scene amid violence against citizens by "radical protesters".

People took to the streets on Saturday to mark the fifth anniversary of the Beijing government banning fully democratic elections in China's special administrative region.

The political crisis in Hong Kong - a former British colony - is now in its third month with no end in sight, the BBC China correspondent Stephen McDonnell says.

The demonstrators then moved to other parts of the complex, blocking roads and other transport links.

The airport is built on a tiny outlying island and can only be reached via a series of bridges.

"If we disrupt the airport, more foreigners will read the news about Hong Kong," one protester was quoted as saying by Reuters.

At one point the airport express train service was suspended. Officials said this was because of debris thrown onto the line.

Following the arrival of riot police, demonstrators first built barricades to slow their advance, then left the airport on foot.

In August, protesters paralysed the airport for several days. Hundreds of flights had to be cancelled.