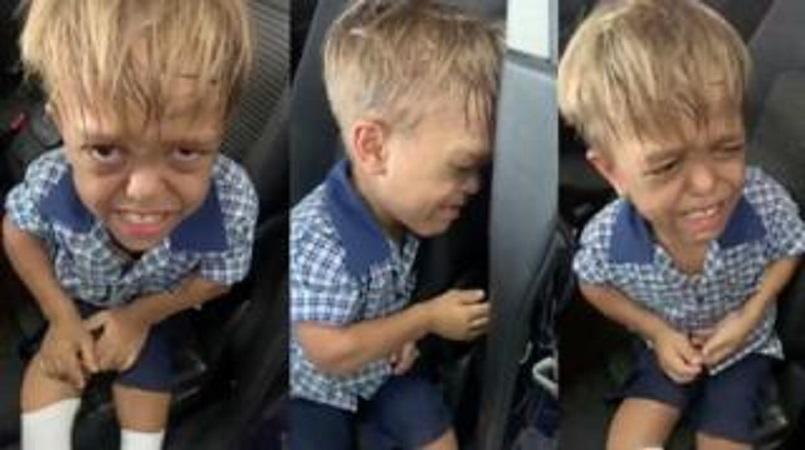 Yarraka Bayles posted the clip of her son, Quaden, crying after he was targeted at school for his dwarfism.

"This is what bullying does," she says in the video, in which her son also says he wants to end his life.

The page was set up by US comedian Brad Williams after the video went viral to raise money to send Quaden to Disneyland.

The National Rugby League's Indigenous All Stars team have also invited Quaden to lead out the side for their match against the Maori All Stars on Saturday.

Celebrities including actor Hugh Jackman and basketball player Enes Kanter have also spoken out, while parents in other countries have shared video messages from their children.

Jackman told Quaden "you are stronger than you know, mate" and called on everyone to "be kind".

Speaking at a press conference, Ms Bayles said she hoped her son's experience was raising awareness over the effects of bullying.

"It's every parent's worst nightmare losing their babies and for me that's my reality every day," she said, adding that suicide attempts "are very real".

"On top of that, being an Aboriginal boy with a disability, people don't understand that's a double-edged sword. There's racism and then there's discrimination because of the disability."

What happens in the video of Quaden?

In the confronting six-minute video, posted on Tuesday, Quaden's mother describes the relentless bullying experienced by her son every day. The family, who are Aboriginal Australian, live in Queensland.

"I've just picked my son up from school, witnessed a bullying episode, rang the principal, and I want people to know - parents, educators, teachers - this is the effect that bullying has," Ms Bayle says as her son sobs.

"Every single... day, something happens. Another episode, another bullying, another taunt, another name-calling.

"Can you please educate your children, your families, your friends?"

Photo: Yarraka Bayles Caption: The video of Quaden crying has been viewed millions of times online