Another 35 Nauru refugees set to depart 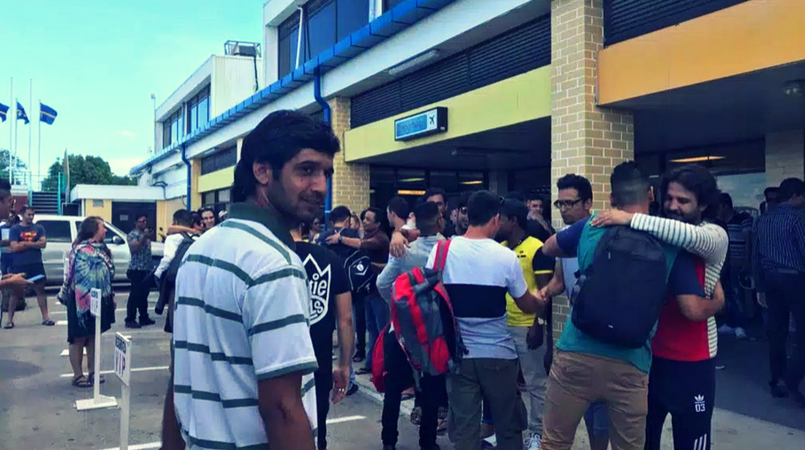 Another thirty-five refugees are expected to fly from Nauru to be resettled in the United States today (18 February) at around 2pm (Nauru time).

Almost all are single men and are Afghan, Pakistani or Rohingya.

In a statement, the Refugee Action Coalition says there is one Sri Lankan family (with four children) and one Bangladesh refugee.

“This will bring the total to 84 people who have flown from Nauru to the US since resettlement began last September,” says Ian Rintoul, spokesperson for the Refugee Action Coalition.

“At least one more flight of refugees to the US is expected by the end of February.

“US officials are expected to return to Nauru next week. But the big question is whether any of the acceptances will include Iranian or Somali refugees.”

After a series of protests on the issue, a letter from Border Force read to Iranian refugees last week said "No nationalities are excluded" from the US Refugee Admission Program but "...nationalities subject to a 'Security Advisory Opinion' may require more time to process".

“But refugees have already been waiting over four years for resettlement. There are up to 100 refugees who have not even had their first interview with US officials,” states the Coalition.

“The conditions on both Nauru and Manus Island continue to deteriorate.

“On Manus Island a few days ago (16 February), a major disturbance involving up to 100 people, out near the Lorengau markets, when refugees went to the market to try to sell food.

“Two refugees were bashed to prevent them coming to the market area,” claims the group.

“Many asylum seekers in particular are resorting to selling food to get money for phone cards and other necessities since the government has cut their allowances since they were forcibly removed from the detention centre on the navy base last November.

“They are now more deprived and less secure.

“Some locals intervened to protect the refugees before police arrived. But the incident has highlighted the precarious security situation for refugees and asylum seekers on Manus Island.”

The Coalition further said a series of court actions in Australia have been necessary to force Border Force to provide medical treatment to refugees, particularly children, which has been denied to them on Nauru.

“Hundreds of people will never get resettled under the US deal,” said Rintoul.

“It remains urgent for all the refugee and asylum seekers to be brought to Australia where they can get the protection they need.”