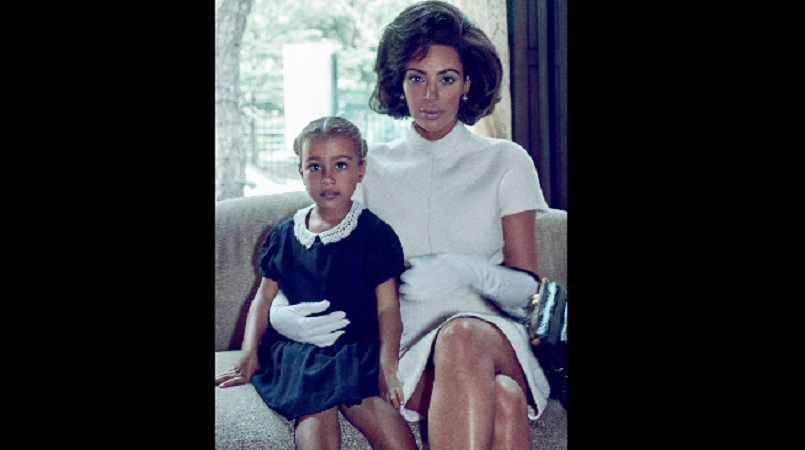 Kim Kardashian West channeled Jacqueline Kennedy Onassis for a cover shoot that's on the receiving end of some harsh criticism on the internet.

The reality star and her four-year-old daughter North are featured on the September cover of Interview Magazine with the headline "America's new first lady Kim Kardashian West and her daughter North West. "

The accompanying story penned by journalist Janet Mock states that "If anyone can be said to embody the American Dream, it's Kim Kardashian West."

But to some, Kardashian West as the former first lady is far from a dream.

"When we start comparing Kim Kardashian to Jackie Kennedy we have officially failed as a country," one person tweeted.

Part of the controversy includes the fact that Kardashian West looks darker than usual on the cover and in the photo spread, where she's fashioned to look like Jackie O.

In June, the "Keeping Up with the Kardashians" star responded to accusations that she was sporting blackface in a series of ads for her new KKW Beauty makeup line.

"I would obviously never want to offend anyone," she said. "I used an amazing photographer and a team of people. I was really tan when we shot the images, and it might be that the contrast was off. "

In the Interview article, Kardashian West said she's "very conscious" of the fact that she is raising biracial children. She is of Aremenian descent and husband Kanye West is African American.

Kardashian West took to Twitter on Monday to share the photos with her 55 million followers. She thanks photographer Steven Klein for a shoot that she said she will "treasure."

In addition to North, Kim and Kanye also have a one-year-old son, Saint.

"We want to raise our kids to be really aware. I think that's all you can do," she said in the Interview article. "The more you talk about things and keep them out in the open, the more they won't be taboo."

"FYI: I did not choose the portraits/art, headline or write the intro," Mock tweeted. "I led the conversation w/ KKW, in @InterviewMag's signature style."