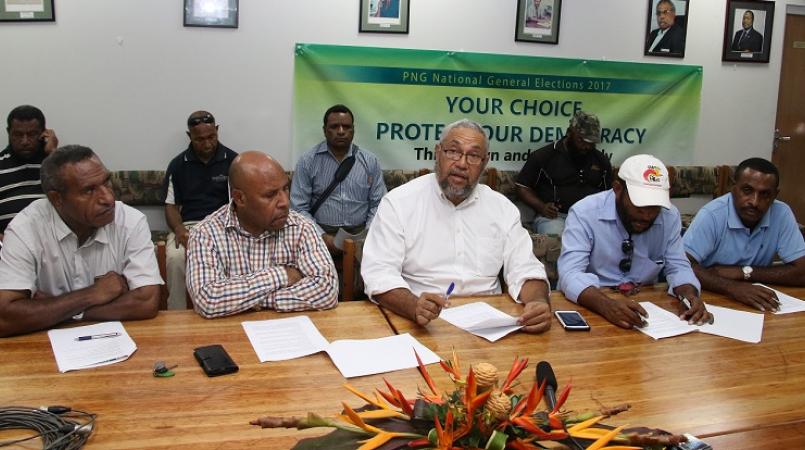 Some candidates contesting both the open and NCD Regional seats are still adamant on the use of CCTV in all counting rooms.

This afternoon they opted to purchase the CCTV for counting in NCD after Electoral Commissioner Patilias Gamato told them that the use of CCTV was not budgeted for, when responding to their petition.

He also told them that by law, scrutineers were allowed to scrutinize polling and counting.

The candidates gave a petition outlining 11 points to Commissioner Gamato on Monday. Among the issues they raised was use of CCTV, Day-counting, Audit of ballot boxes, Electronic counting, the removal of NCD Metropolitan Superintendent Benjamin Turi, the engagement of Gerehu and NCD reserve police and the inclusion of AFP in counting venues.

However, despite Gamato’s response to them in writing after the 3pm press conference today they were still adamant to talk to him on the issue of CCTV and day counting.

They were not satisfied with his response to day counting and the use of CCTV camera.

Gamato had responded that ballot papers from NCD are too many and their request for day counting only will result in a delay.

He advised that counting will take place on day and night shift so that it can be completed on time in NCD.

The candidates raised the issue saying from past experience, power interruption in the counting venues took place and they did not want history to repeat itself.

They said the use of CCTV was for transparency's sake and not their personal interest.

NCD Election Manager Alwyn Jimmy also met the candidates and assured them two standby genset will be used during counting.

Three issues raised by the candidates were beyond Commissioner Gamato’s jurisdiction, which he could not respond to. These included their call to have Metropolitan Superintendent Ben Turi removed, engagement of Gerehu and NCD reserve police and inclusion of AFP in counting venues.

Commissioner Gamato said their petition on Turi was originally addressed to Police Commissioner Gari Baki, and he cannot make any decision on that because he has no jurisdiction.

He said the same for their petition on the engagement of Gerehu and NCD reserve police and inclusion of AFP in counting venues.

Both petitions were addressed to ACP Sylvester Kalaut and Commissioner Baki.