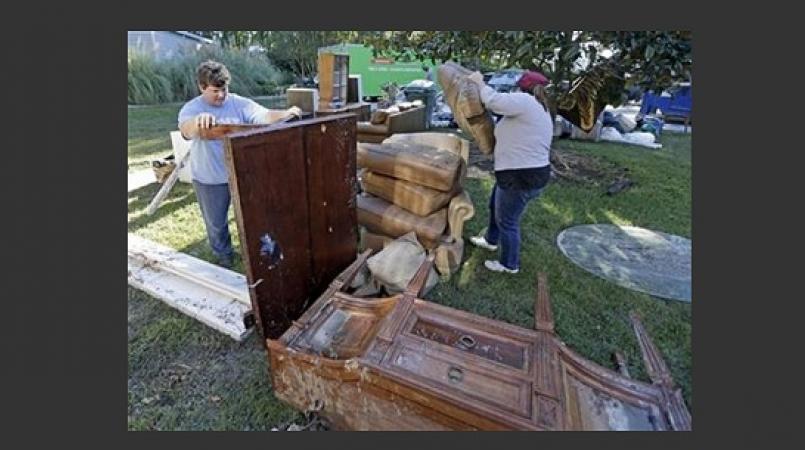 Rivers rose and dams bulged Wednesday as South Carolina faced another anxious day of waiting for the floodwaters to recede, and dive teams searched for two people who disappeared in waters after they drove around a barricade.

Along the coast, residents prepared for a second round of flooding as rivers swollen from days of devastating rains make their way toward the Atlantic. In the Columbia area, where some returned home to assess damage and clean up, the threat of more flooding still hadn't lifted.

About 1,000 residents near the compromised Beaver Dam were told to evacuate Wednesday morning, though the order was lifted several hours later when crews shored up the dam.

At least 17 people in South Carolina and North Carolina have died in the storm.

In coastal Georgetown, one of America's oldest cities, Scott Youngblood put more sandbags by the door of the Augustus & Carolina furniture store on Front Street, the popular tourist attraction that runs along the Sampit River.

Each day since last weekend's storm — which sent more than a foot of water washing down the street — water at high tide has lapped against those sandbags. Residents worried there may be more flooding on the Black and Waccamaw rivers. Both drain into Georgetown County.

Youngblood hopes things won't be as bad as earlier in the week.

"We're hanging our hat on that we're not going to have that combination of tide and rain and such," he said. "We had so much rain, but the primary thing we were experiencing was the water table coming up through the bottom bubbling up from beneath the flooring. We had quite a bit of damage."

"We are watching this minute by minute," she said. She said evacuations may be needed toward the coast because of swollen rivers.

At a shelter in Columbia, Graham said it would take weeks to get a good damage assessment.

"We're talking hundreds of millions (of dollars), maybe over a billion," he said.

On Tuesday, the governor said it could be "any amount of dollars."

Graham also warned state and county officials not to use the disaster as an opportunity to ask for money unrelated to flood damage. He criticized the federal government's aid package to the Northeast following Hurricane Sandy in 2012, calling it a "pork-laden monstrosity."

Rescue crews searched for two people who vanished in Richland County when their pickup entered flood water. Sheriff's deputies said the pickup's driver went around barricade for a road that had been closed for several days after being washed out.

Three people managed to get out of the truck safely. Teams searched the area in rescue boats and dive gear.

Electricity had returned to most homes and businesses and about 10,000 people were without water, down from a peak of 40,000.

Roads and bridges were taking longer to restore: Some 200 engineers were inspecting more than 400 spots that remained closed Tuesday, including parts of Interstate 95.

And crews in Columbia were still working Wednesday to repair a breach in a canal that was threatening the main water supply for 375,000 people, Utilities Director Joey Jaco said. Workers were building a rock dam a few hundred feet north of the breach, which is near the city's hydroelectric plant.

Jaco said the only danger now is for the canal — built in the early 1800s and supplying 35 million gallons of water to the city's water plant each day — to breach in a second spot, but he added that the levy shows no signs of buckling.

At the Beaver Dam in a neighborhood in northeast Columbia, officials worked to shore up the dam and said they believed the worst has been averted.

Col. Brad Owens said crews worked through the night using sandbags and dropping rocks to hold back the escaping water. Part of the roadway has been eroded and has been closed for days, Owens said.