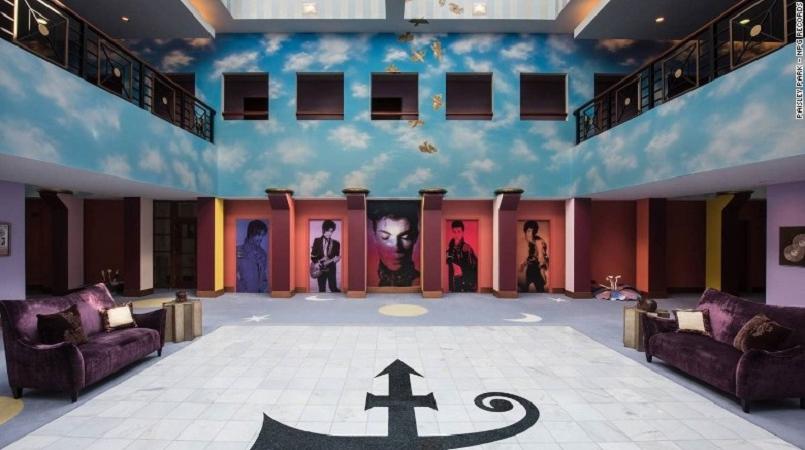 Paisley Park, the home and recording studio of Prince, opened its doors to the public Thursday for the first time since the musician died in April.

Rhona Levene flew from London to be among the first visitors inside Paisley Park.

"It's my birthday," Levene told CNN. "I couldn't think of any other way I'd want to celebrate."

After taking a short shuttle ride through the property's front gates, Paisley Park guests were escorted through a lobby and into an atrium filled with Prince memorabilia and painted murals. At the center of the room was an urn -- purple and shaped like a crypt -- containing the artist's ashes.

Many attendees Thursday spent time paying condolences to Prince, some visibly showing emotion at the sight of his final resting place.

"It was reverent," visitor Diane Fluin told CNN. "Everyone was very quiet and there was a lot of tears and hugging."

In Prince's office were family photos and open briefcases left untouched since his death.

The tour proceeded through recording and editing studios where Prince created much of his work. Studio A, the largest at Paisley Park, will be opened for artists to use in the future.

There were rooms representing different eras in Prince's career, each featuring various stage costumes and instruments.

Guests also toured through a massive sound stage on the property where Prince shot music videos and held private concerts and parties.

Paisley Park visitor Erin Goedtel described the tour as a celebration of Prince.

"As soon as I got in, I felt really honored to be in a space that he had created to bring people into his world and his thoughts and his vision," Goedtel said.

Additional tours will be held Saturday and on Friday, October 14.

In December, The Chanhassen City Council will consider a request to rezone Paisley Park so it can operate as a museum and offer daily tours.