Celebrity prankster says what he does is 'not sexual assault' 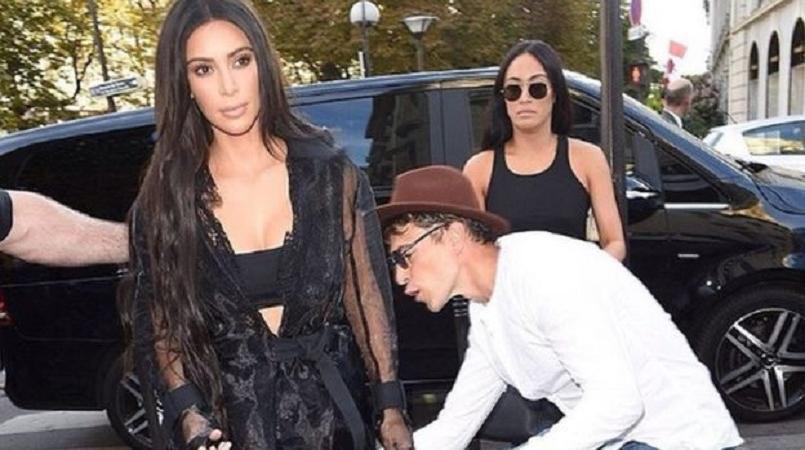 The self-described "prankster" who has become known for physically accosting celebrities on red carpets says what he does is "not sexual assault".

During Milan Fashion Week, the Ukrainian snuck up behind model Hadid and lifted her off her feet as she left a fashion show.

The 27-year-old also tried to kiss Kim Kardashian's bottom last week during Paris Fashion Week, but was subdued by her security.

"You're giving a bad word to sexual assault," he told Victoria Derbyshire.

"Sexual assault is basically rape. Did I rape anyone? No. I disagree. It's not sexual assault."

After being challenged that there is a wide spectrum of sexual assault, he denied that his actions fell under that bracket.

'Girls have the right to fight back'

After pictures emerged of Hadid elbowing him in the face, a debate began on social media about whether his actions were an assault or just a prank.

Hadid wrote in Lena Dunham's blog, Lenny Letter, that she felt "in danger" during her encounter with Vitalii.

"I had every right to react the way I did. If anything, I want girls to see the video and know that they have the right to fight back, too, if put in a similar situation.

"It sounds [a] cliche to say it, but in the moment, it wasn't heroic to me. It was just what I had to do. I know people are put in much worse situations every day and don't have the cameras around that provoke social media support."

The 21-year-old added: "I just want to use what happened to me to show that it's everyone's right, and it can be empowering, to be able to defend yourself."

Vitalii worked as a reporter for the Ukranian TV Channel 1+1, but now appears to publish content to his own social media platforms.

At the time of his "prank" on Kim, he explained on Instagram: "I was protesting Kim for using fake butt implants.

"I encourage her and the rest of the Kardashian clan to popularise natural beauty among teenage girls who follow and defend them blindly."

Vitalii says he didn't plan the "prank" he pulled on Kim, saying he was sitting in a cafe with an ice cream and she turned up at a venue opposite.

"It was the perfect situation for me. And that's why I did that."

He added that he will not be "pranking" the reality TV star for a third time, "absolutely no".

"I would feel bad if I had bad intentions. My intentions is never to offend someone. So I would never cross the line by punching someone."

Brad Pitt, Bradley Cooper, America Ferrera, Ciara, Leonardo Di Caprio, and Will Smith are just a few of the celebrities who have encountered Vitalii.

His attack on Brad Pitt during the Maleficent premiere back in 2014 resulted in a community service order in the US and he was banned from all red carpets in Los Angeles.

Vitalii insisted that he is a "serious journalist", having interviewed people like "Bill Clinton and highlighted terror attacks in France and the United States".

According to the celebrity website, TMZ, Kim is seeking to press charges and get a restraining order against Vitalii.

He grabbed at her legs at the same venue during the 2014 Paris Fashion Week.

"Some pranks are funny, some pranks are less funny. It's up to you to decide. My intention is never to hurt anyone, never to offend anyone. I'm basically a normal guy."

Vitalii admitted that he does his "pranks" for "attention" and wants to be like Piers Morgan, the British journalist and television star.

"I'm doing this for attention, and the more attention I receive the bigger platform I can get to express my opinion on certain topics.

"I would be surprised if someone lifted me up from behind as well," he added.