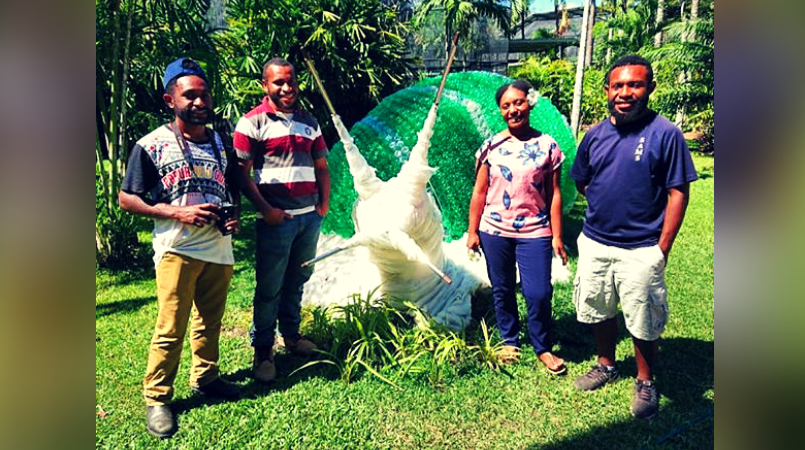 The Port Moresby Nature Park has been raising awareness on caring for the environment through its BSP Trash to Treasure Sculpture Festival, which will officially end 31 July, 2019.

For the entire month of July, the theme “Rethink Your Rubbish” has been emphasized at the Nature Park by the  creation of larger than life animal sculptures built from solid waste collected around the city and used to create aesthetically powerful works of art that visualize the type and amount of rubbish generated here.

The animal sculptures were made by local artisan Leonard Tebegetu from Kreativ Kanaka with help from student volunteers from the University of Papua New Guinea.

The past four weeks since the opening of the “BSP Trash to Treasure Sculpture Festival”, thousands of people have come through the park to see and learn about our use of plastic, the impact it has on the environment and its habitat and ways we can rethink our use of plastic rubbish.

Around 300 million tons of plastic is produced each year to make bags, bottles, packaging and other items for consumers around the world. This is the equivalent weight of the entire human population. While some of this is useful, 50 percent of it is used only once and gets discarded where it ends up littering our streets, polluting our oceans and causing harm to wildlife.

Port Moresby Nature Park’s General Manager, Michelle McGeorge, said: “The question of our times is how can we stop our reliance on plastic usage and how can we rethink our rubbish to find alternative uses for what already exists.

“The amount of plastic we use every day, week in-week out, year in, year out is appalling. We are harming the environment and its habitat more than we know. If we can start rethinking our use of rubbish, be it at home, work, village, town or cities, we can make a difference.

“On this note, I’d like to thank BSP for sponsoring this festival and making it possible for the park to continue its work and rolling out educational and community programs for the benefit of the general public,” McGeorge added.

An extensive signage campaign was run alongside the works to provide further education about plastic pollution and a craft station set up to encourage visitors to the park. With a growing awareness of what can and needs to be done, creative and sustainable answers to the questions will no doubt soon be found.