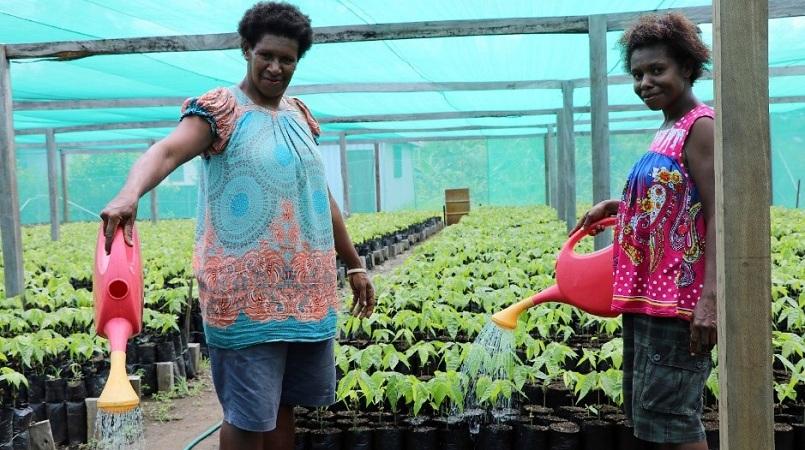 A partnership between the PNG and Australian governments has helped a local cooperative in the Nawaeb District of Morobe Province to revive cocoa farming in the area.

The Situm-Gobari (SiGo) Cocoa Cooperative nursery was opened on 1 May in Situm.

Supported under the PNG-Australia Governance Partnership, the SiGo Cooperative was given 25,000 seedlings in 2018 to engage men and women in the area to revive cocoa farming as a source of livelihoods and economic growth in the district. Cocoa farming was severely impacted by a cocoa pod borer outbreak in 2017.

The seedlings were supplied by the PNG National Agricultural Research Institute (NARI) in East New Britain to enable seedling tilling in the newly constructed nursery.

Cooperative members are third and fourth generation settlers who own blocks of land in the Situm-Gobari area. SiGo Cooperative deputy chairperson, Margaret Storr, said the cocoa nursery project has given members an incentive to stay in their community to generate an income, rather than seek work in Port Moresby.

“I used to dream of purposefully using my land, but lost motivation when nothing was happening here in our community. I haven’t left my community since we started the cocoa nursery project and am settled now and ready to build a future for myself and my 18-year-old son, who helps with working in the nursery when I need him,” said Storr.

“Thank you to all partners for helping simple communities like ours to be in a position to drive change and to enable economic means for our people.”

Ali Simbi, chair of SiGo Cooperative, said the collaborative effort of the community and members was not only reviving cocoa in the area, but also enabling the people to have a voice in community issues and local development.

“We are now seeing strength in numbers and what the community can achieve together from collectively working in the nursery to have equal participation of men and women in community affairs and activities,” said Simbi.

Nawaeb is one of six priority districts under the PNG-Australia Governance Partnership, including Mul-Baiyer-Lumusa in Western Highlands, Talasea in West New Britain, Nuku in Sandaun, Sohe in Oro, and Manus.