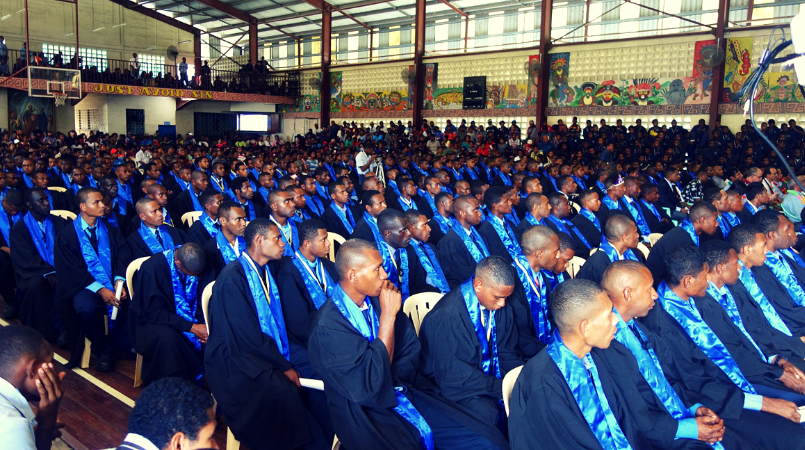 It was a heartfelt and joyous moment for Don Bosco Technical School at Gabutu as it graduated 92 Grade Twelve and 163 Industrial Training Course 2 students during its 22nd Speech Day.

The event, held at the school’s campus on Friday 22nd November, saw students attaining certificates for both Grade Twelve and the Industrial Training Course (ITC) 2. Those who finished ITC 2 also received the National Certificate 2 (NC2) issued by TVET.

A Baccalaureate Mass presided by Fr Alfred Maravilla SDB (Provincial Superior of the Salesians in PNG-SI) and concelebrated by five Salesian priests was held in the morning at Don Bosco Church. In his homily, Fr Alfred challenged the graduating students not to just have a dream but to discover God’s dream for each one of them and then cooperate with God in the fulfilment of His dream.

And in case they are still trying to figure out this dream, Fr Alfred pointed out that it was already captured by the theme of the celebration: “Holiness For You Too!” which actually came from the 10th successor of Saint John Bosco, Fr Angel Fernandez Artime.

The Graduation Rites were held at the Kurongku Hall.

Vanariri Dann, a teacher at Gordon Secondary School, thanked and congratulated the institution for inviting an ordinary teacher like him to address the school at such an important event. In his address, Dann urged graduates to strive harder in their lives, guided by values of Holiness as a moral compass.

“When you are guided by holiness in your work, you will never go wrong and you will always prevail over challenges because you are tied by the universal values of humanity. Continue to always remind yourselves of these values,” he said.

The occasion was also graced by the presence of Fr Dominic Kachira (Vice Provincial of the Salesians in PNG-SI), Fr Alexander Garces (Rector and President of DBTI in Boroko), Fr Giorgio Lucini (Secretary General of Catholic Bishops Conference of PNG-SI), Salesian Sisters, managers and representatives from the industries and other institutions.

In his speech, Fr Savio Angelo S. Sanchez SDB, the Rector of DBTS who is finishing his three-year term, congratulated the students and reminded them that “graduation is not an end but only a transition”.

He further emphasised that in Salesian schools, importance is given to the soul.

“The real reward is not something written on the certificate or etched on a medal,” he told the students. “As Christians, the reward we all should work for is heaven,” he said.

Grade 12 Graduate and a recipient of the International Training Institute Scholarship Award, Leckson Vincent, spoke of his excitement at receiving his award and described it as positive boost to his future ambitions. “I am humbled at receiving this award from ITI. This is a big step forward for me toward taking up computing as my dream profession,” he said.

Service Award recipient Miroslaw Apini said he would always be grateful for everything learnt at DBTS and urged for the school to continue its constant efforts in helping the youth. “I will go for further studies elsewhere. But if ever there is an opportunity in future to return to DBTS as a teacher, I will be more than happy to accept,” he stated.

Over two thousand people gathered to witness the event. Many arrived as families, relatives and friends to support their sons, nephews, brothers and uncles graduating in their respective technical trade.

The day was capped off with the graduates singing their hearts out. Their voices resounded in the Kurongku Hall as the Bosconians sang their Graduation Song entitled, “A Million Dreams,” followed by the traditional Alma Mater Song of the school which ends with a powerful line that says: “Youth of today, forward march!”