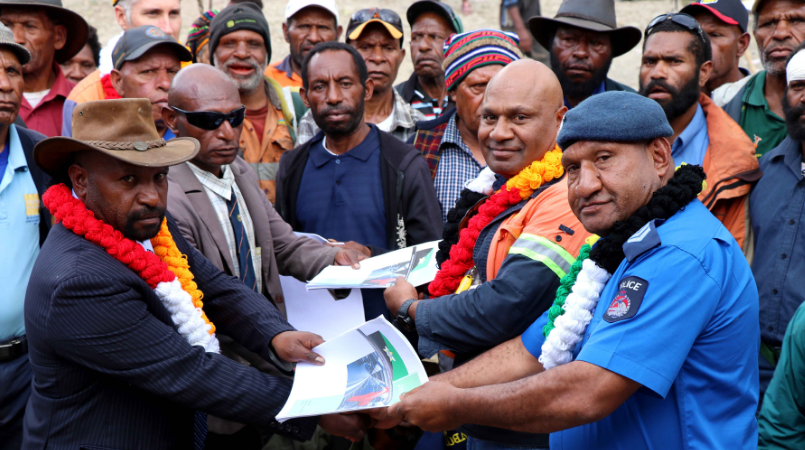 A community in Porgera, Enga, known for its illegal activities in the sale and distribution of alcohol, marijuana and tribal fighting, has publicly denounced lawlessness for a more peaceful future.

Yokoloma is a community within the Special Mining Lease (SML) of the Porgera Gold Mine.

On 26 February, one of the biggest clan within the SML area, Mamai Clan, made up of people basically from Yokolama, Alipis and Panadaka, took ownership to denounce publicly the sale and consumption of alcohol, marijuana and illegal drugs. They also said no to engaging in unacceptable social activities such as tribal warfare or violence, carrying around offensive weapons in public and stealing and illegal mining within the clan areas.

The undertaking by the Mamai Clan was witnessed by Porgera Police, the Porgera Law and Order Committee and stakeholders that included the Porgera Joint Venture (PJV), business community representatives, Porgera District Women’s Association, youth groups, local leaders and members of the public.

A local and member of the Mamai clan himself, Andambo said the clan has set the pace for all of the clans in Porgera because it was the first major clan within the SML area to take the lead to stop people from engaging in illegal activities and unacceptable practices within its communities.

PJV’s Community Relations Officer (CRO) Sukul Tupia, who is a community leader, councillor and chairman of the Porgera Law and Order Committee, said it had been identified that the source of all tribal conflicts that have been escalating in recent years have been alcohol and drug-related.

Tupia is also an arbitrator and leads in mediation relating to tribal conflicts within Porgera valley.

“I’ve been taking the lead to stop conflicts and tribal fights and I’ve found out that, all these tribal conflicts are not caused because of disputes over man, woman or land, like in the past. Our forefathers fought for people and land. But these days, we see that tribal conflicts are caused primarily by alcohol and drugs.”

Liston, on behalf of PJV, said company’s interest is in the safe and successful operation of the mine, working in line with the interest of all levels of government and continuing to be economically viable.

“When we are economically viable, we can continue to provide employment opportunities, contract opportunities, royalties, land compensation and support to schools, the hospital, and development in Porgera, and the Enga Province. I encourage you, and I wish you every success in your initiative to improve law and order on Mamai lands,” Liston said.

Porgera Police Station Commander (PSC) Senior Sergeant Jack Kimala challenged the public to take responsibility in addressing law and order and not to expect the police to address social issues and conflicts that occur within their societies.

A detailed document containing the Mamai clans’ plans and policies was presented to Andambo and PSC Kimala.