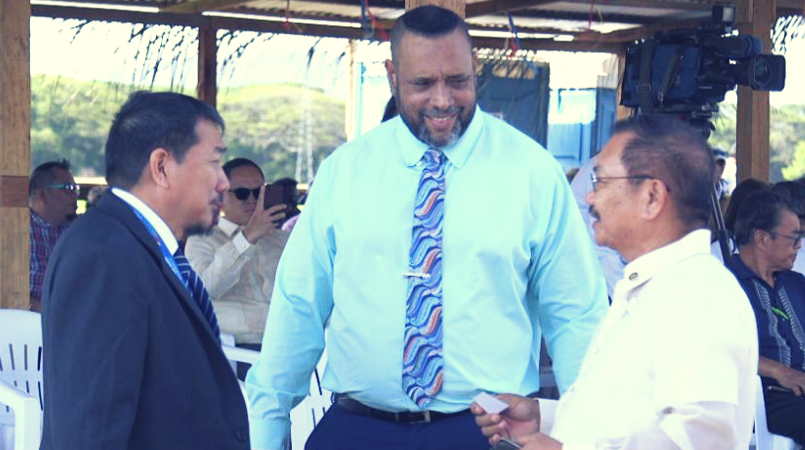 East Sepik Governor Allan Bird and the government of Philippines, through its Embassy in Port Moresby, are in discussions to move the development of a rice project in the Sepik Plains.

This follows an MoU Agricultural Cooperation signing between the two countries on Friday (November 16th) at the PAU rice demo farm.

The MoU paves way for the two countries to move forward in commercial rice production, with technical assistance to come from the Philippines.

Governor Bird said the interest of rice farming and production in his province is quite extensive and wants to capture that opportunity and to develop it jointly with the Filipinos.

“The largest rice technology, science around rice and all that is actually owned by the Philippines, and it makes sense for us to partner with them, given the large land we have.

“For us, rice is not really a food security issue, for us, Sepiks prefer to eat sago, they prefer to eat yams, bananas, sweet potatoes, cassava so it will purely be a commercial exercise for us.

“They’ve (Philippines) sent their experts to East Sepik, they’ve tested the soils, they’ve set the satellite over the Sepik plains to have a look, they’ve figured out where the best place is to grow rice.

“We are just waiting for this signing,” Governor Bird said.

In East Sepik, small scale rice production has started in the Angoram area and is already being sold in shops in Wewak.

“We know something about growing rice on a small scale subsistence level, but we don’t have the expertise as a country to do large scale commercial plantation, and this is where it’s important for us, with the signing of this agreement that gives access to their technology, it also enables them to bring in experts,” he said.

The first trial will be done in Wosera, and landowners are ready.

“We have about 300 hectares, that’s just for the next stage of trial. But we’re looking to grow hundreds of thousands of hectares of rice,” Governor Bird added.

Philippines imports rice from Vietnam, Thailand, Pakistan and India, but with their growing population and the demand for rice, they might not have enough to feed their own and export.

It is now looking to PNG to assist through such agricultural cooperation.

Philippine Secretary of Agriculture Emmanuel Pinol said the target for Papua New Guinea now through that cooperation is to be able to cultivate about 100,000 hectares within the next years.

“But we will go beyond that, Governor Allan has offered a large amount of land in the East Sepik.

“In the Philippines, the rice grown would have between 30 to 40 tillers, here in PNG we have 50-60 tillers.

“We are projecting that we could easily hit eight to ten metric tons per hectare, in the Philippines we are only producing four to six metric tons,” Pinol added.