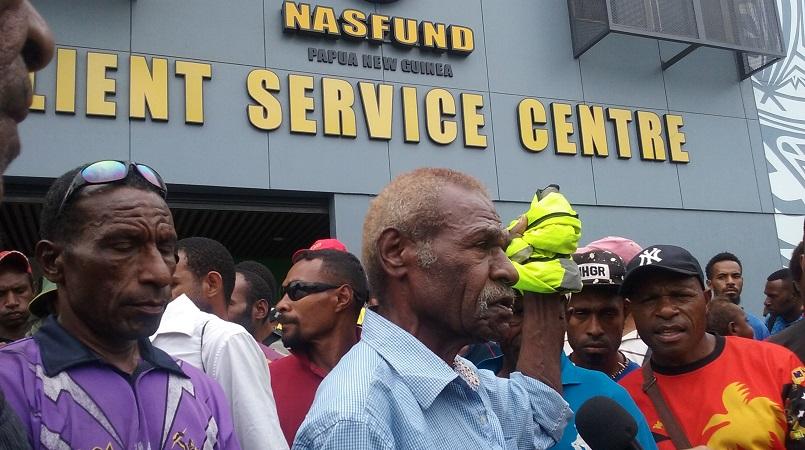 The start of the first working day of 2018 did not go well for contributors of superannuation NASFUND who turned up at four mile office only to find the door locked after 9 am.

Many of the members had put in applications for their payment prior to the festive period.

Frustration over delayed payments and continuous follow up resulted in them openly expressing their frustration outside the four mile office when our crew arrived on the scene.

They turned up early this morning only to find the doors locked after 9am. This went on an hour and a half.

One of the frustrated members, claim she had been waiting since July last year for their payments.

She said it’s time for parents to pay school fees and they (members) need the superannuation to explain the delay.

Susan Haumu was another frustrated women who turned up at the office this morning. She had been assisting her uncle try get his funds and said they had been going to the office for the past four months.

“He thought he would go back at Christmas, but he’s still here. He saw Christmas lights here in Moresby. Please Nasfund come out here and tell us, we need our money.”

Another member Supa Teine said he put his application before the festive period, only to get the response- come back next week.

“I’ve borrowed money and it’s gone up to K3000 already while waiting,” he claimed.

NASFUND management refused to go on camera but clarified the office door was locked this morning till 10:30am because the keys were misplaced and it had nothing to do with Nasfund not wanting to service its members.

The superannuation said months leading up to the festive period, it receives an influx of members applications. It’s not a new thing but the normal cycle of members rushing to get their funds.

Nasfund gave its assurance it will be sorted out. It met with Kina Bank today who manages its member’s accounts.