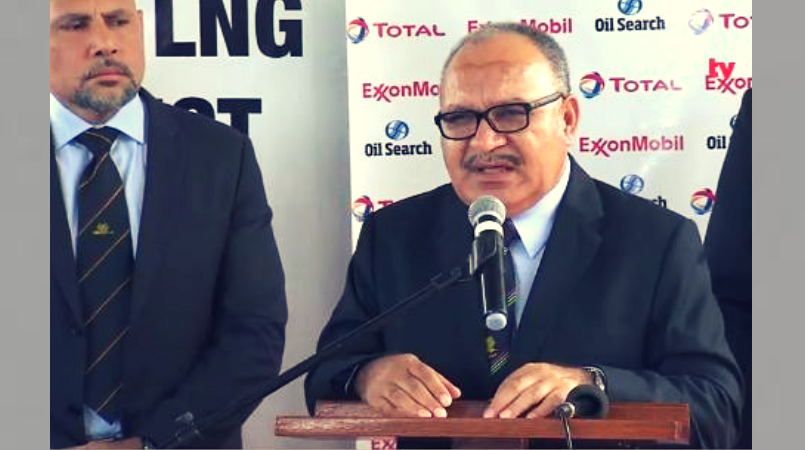 Joint venture partners of the Papua LNG Project will carry the State for at least 50 percent of the ‘sunk cost’ needed to secure the State’s equity in the project.

Money already spent, but that is not recoverable, is a sunk cost.

This will be repaid once first gas is produced at an interest rate of 7 percent.

Speaking after the signing of the Papua LNG Project Agreement, which defines the fiscal framework of the project, Prime Minister Peter O’Neill said an understanding has been has been reached with the JV partners for the deferment of the state ‘sunk cost’ for its equity in the project.

The Prime Minister said the arrangement does not put pressure on Treasury to find the money to fund the state’s interest and avoids the borrowing of massive loans.

“When we are in production, our country can start paying some of the cost that they (JV partners) have incurred which means that we are not putting stress on our resources, that treasury cannot be able to be told to pay for these costs upfront and we do not have to go and arrange expensive borrowings overseas, so that we can fund these.

“So the understanding is that when we produce gas we will start paying the sunk cost. Similarly to equity, when you recall the first LNG, we had to go to Arab, we had to go to other banks in the region to try to borrow money for our equity to pay for these sunk costs, that is not going to happen in this project

“We don't want expensive loans that are to the detriment of our country, we are paying very expensive prices for those loans,” said O’Neill.

“We are having a fixed interest rate of 7 percent, that 7 percent is much lower than any commercial loan that any Government entity or government has ever borrowed before.

“Just to give you an example, when we went to the bond market, we issued a bond at 8.25 percent, meaning we pay at a higher price.

“Now the JV partners have agreed to a funding of 7 percent which I believe will be much lower than if we went to the commercial banks to borrow from them.

“But if there are cheaper options, the JV partners have agreed to a flexibility that we can repay that earlier if we have cheaper financing elsewhere. So it gives us a lot of opportunity that we participate meaningfully and at the least cost to our people, and our country.”

Meanwhile, the Prime Minister highlighted other key outcomes of the project agreement which include:

The Prime Minister said the project is the first where nearly 50 percent of the take will come back to PNG.

The Papua LNG Project will see an investment of K13 billion.