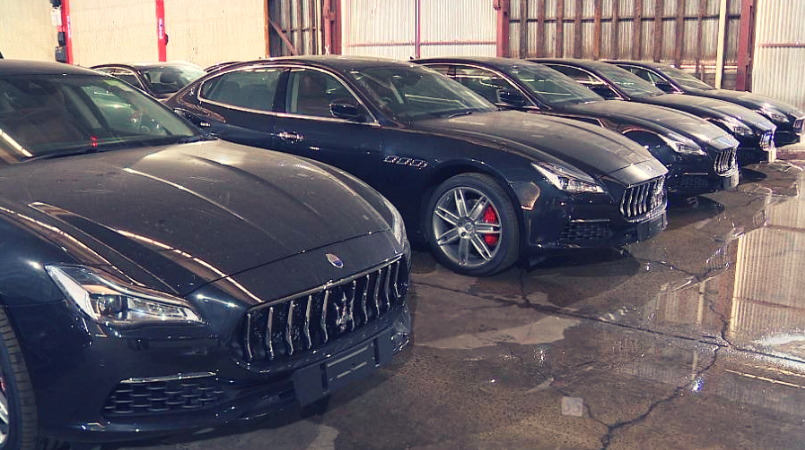 In an effort to put rumours of missing APEC luxury sports cars to rest, the APEC Authority and Finance Department took the media for an inspection today.

40 Maseratis and two Bentleys were counted in a warehouse at T-wharf, with the Finance Minister saying the third Bentley is at Government Haus.

Finance Minister James Marape and APEC Minister Justin Tkatchenko led the group this morning as they opened the doors of the warehouse to reveal the vehicles.

The sale of the vehicles was put on hold after Sir Mekere Morauta raised a question in a recent Parliament sitting on these State assets, which prompted an intervention by the Ombudsman Commission.

The Ombudsman Commission then issued a Constitutional direction saying the vehicles cannot be disposed of without its approval.

The Finance Minister said today that they received the signal to go ahead two days ago.

“All state assets will be properly accounted for, and what is held in our custody will be disposed in a manner that is fair and friendly and consistent with the requirements of the Public Finance Management Act,” said Marape.

Those vehicles that were donated by donor agencies and bilateral partners will not be sold but distributed to PNG’s educational and health institutions.

“They have placed their request to us that what they’ve given to us will not be sold.”

Assets purchased by the state have been placed on public tender. Of the three Bentleys, the state will purchase one for the Government Haus.

“So that the reconciliation of the purchase and asset ownership is complete in that regard,” explained Marape.

“No one is here to siphon off one of the Maseratis or Bentleys and park it in someone else’s house or dispose it in a manner that is not subscribed under the Public Finance Management Act.”

(The vehicles in a warehouse at downtown Port Moresby)